DANCE VIEW; When a Choreographer Settles Into a Formula

By Anna Kisselgoff
Published: July 03, 1988
WILLIAM FORSYTHE, A MAJOR talent worth following even when he is stuck in a groove, is represented all around us this season. West Germany's Frankfurt Ballet, where he has been artistic director since 1984, has just appeared in New York City - as part of the First New York International Arts Festival - for the first time (the company made its United States debut last summer at the PepsiCo. Summerfare festival in nearby Purchase, N.Y.) with local Forsythe premieres that came on the heels of ''Behind the china dogs,'' choreographed for the New York City Ballet's American Music Festival this spring.

At this writing, ''In the middle, somewhat elevated,'' created by the American choreographer last year for the Paris Opera Ballet, has yet to be presented by that company during its current New York season. But there is little reason to believe that it is different from the line of ballets that Mr. Forsythe has been choreographing in the last five years, of which ''Behind the china dogs'' and the 1987 ''New Sleep'' for the San Francisco Ballet are typical examples.

If one reads Mr. Forsythe correctly - and the subject of his current work is how one actually perceives the language of dance or ''reads'' it - he has settled into a formula for creating dances rather than a true esthetic.

The ''old'' Forsythe (he is only 38 years old) made his first impact as a manufacturer of pop imagery turned against pop culture. Unlike most of my colleagues, I admired his updated ''Orpheus'' (created for the Stuttgart Ballet with the English playwright Edward Bond and the German composer Hans Werner Henze) for its theatrical impact and the power of its political message.

At that time, we had not seen the West German Tanztheater movement, which was to surface later in Pina Bausch's success abroad. But when the Netherlands Dance Theater presented Mr. Forsythe's ''Say bye bye'' in New York in 1981 it was obvious that this critique of American culture via Elvis Presley songs was highly innovative. It married a formal substructure - a thematic use of ballet steps in many varied ways - with theatrical imagery.

Since 1983, Mr. Forsythe has chosen to strip away the narrative pictorial imagery. He has abstracted this approach to its bare bones. We see a deliberately restricted number of steps performed by dancers in more than one way (often repeated, often changed slightly, usually placed in different contexts according to how many others are doing the same steps). In place of dancers identifiable as characters, no matter how anonymous, the performers are seen as dancers. They are only one of several formal elements that come into play. The choreography is presented in fragments, and that is because the lighting, usually by Mr. Forsythe, is full of blackouts, eclipses, obscurity or blinding light that segments the dancing. The ''music'' is more often than not a spoken text, woven into fragments of classical music or heard alone, or it is an electronically produced sound score, usually by the Dutch composer Tom Willems, which has a percussive and goading loud beat - a cross between the wooden blocks clapped together in Kabuki drama and a rock-music rhythm box.

This is not the Forsythe represented by ''Love Songs,'' re-staged for the Joffrey Ballet in the 1980's and that was, in the recent season at the City Center, performed with admirable if more violent power by the Frankfurt dancers (some of whom are Americans familiar from American companies). The cast I saw was smashing on all counts - Amanda Miller, Isabel Gerber, Elizabeth Corbett, Glen Tuggle, Andrea Tallis, Jennifer Grissette, Leigh Matthews, Stephen Galloway.
The Forsythe on view today is the one who took off from ''France Dance,'' created in 1983 for the Paris Opera Ballet, and from ''Gange,'' created the same year in Frankfurt and later recycled for the Joffrey as ''Square Deal.''

There's the rub. Much of Mr. Forsythe's present work is a recycling of itself. And after one has admired the difficult and aggressive partnering, amazing directional changes, the attack of the women's toe work and the off-balance dynamic of Mr. Forsythe's approach to the classical ballet idiom, one admires it less when a style becomes confused with a language.
At his best, Mr. Forsythe knows how to create for the specific dancers at hand. In ''France Dance,'' he picked out still relatively uknown French dancers like Sylvie Guillem and choreographed for their bodies and polished technique.

Seen at the City Center, the otherwise impressive Frankfurt dancers (engaging in their tribal counterculture postures in works like ''Skinny'' and ''Same Old Story,'' repeated from last year) took second place to the peformance of Sabine Roth. Miss Roth is a dwarf and an eloquent actress, and her height was used in ironic contrast to the cutouts of buildings and monuments that she moved around constantly - Donald Trump fashion. These cutouts were of the Eiffel Tower, the Empire State Building, the Tower of Pisa, the Parthenon and so on. There were also big cutouts of animals, some prehistoric, and since the movement themes were based on fragmentary gestures from George Balanchine's seminal ballet ''Apollo,'' the work obviously had something to do with history.

What is history, what is dance? Mr. Forsythe likes to take a problem from his readings in literary theory and use it as a springboard for a ballet. Many of these issues, however, have already been examined by experimental modern-dance choreographers in the 1960's, and the use of permutation in movment to test perception is not an end in itself. If I sound disillusioned, I am not. I know Mr. Forsythe can do better. 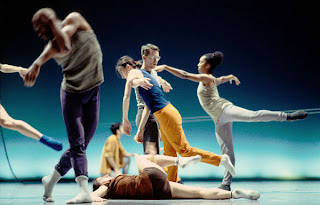