In many ways, Toy Guns Dance Theatre offers the perfect latter-day Fringe show. No longer really on the fringe, the shows that do best are well crafted, accessible, provide humour and entertainment, and aren’t too challenging for the mainstream fans that attend the performances.

And if entertainment is what you’re after and you’re coming in from the ‘burbs, Toy Guns Dance Theatre might be just the thing for a summer night at the Edmonton International Fringe Festival. For the sake of brevity, and because these two pieces follow the exact same formula (described shortly) and offer the same subjects, both Propylene Glycol, Maltodextrin, Retinol Palmitate, and Other Words I Don't Understand Like Love and Bright Lights Cold Water – watching Netflix at 3am questioning your mortality will be reviewed together. It’s quite possible their other Fringe show Red Wine, French Toast, and The Best Sex You've Ever Had follows this same formula as well, and therefore it’s quite probable that it’s just fine that you didn’t go see it.

Toy Guns Dance Theatre is a project by the boisterous, playful, and multi-talented Jake Hastey. Hastey’s background consists of a brief pre-professional ballet career, as well as a theatre and music performance background, all of which are components for this genre called dance theatre.

The term “dance theatre” enjoys a confounding range of meanings, from the artistic and avant-garde work of Pina Bausch and Yanira Castro to the accessible and mainstream efforts of Toy Guns. It seems to be important to Hastey to balance what he believes to be art with entertainment and mass appeal. This proved to be true for Toy Guns as their large audiences sold out most nights at the Fringe and both of their shows were among the few shows that were held over—completely unheard of for dance at the Fringe. Particularly when most reviews of Fringe dance performances consist of theatre critics attempting to convince the audience that dance as a performing art has a few merits, and if you normally can’t tolerate it, you might hold your nose and attend a dance show this Fringe. Naturally there’s no mention that attending theatre, as a performing art, is similarly chancy. 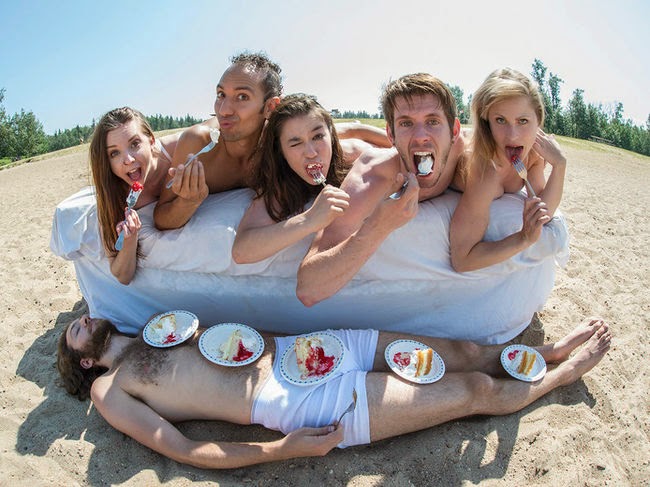 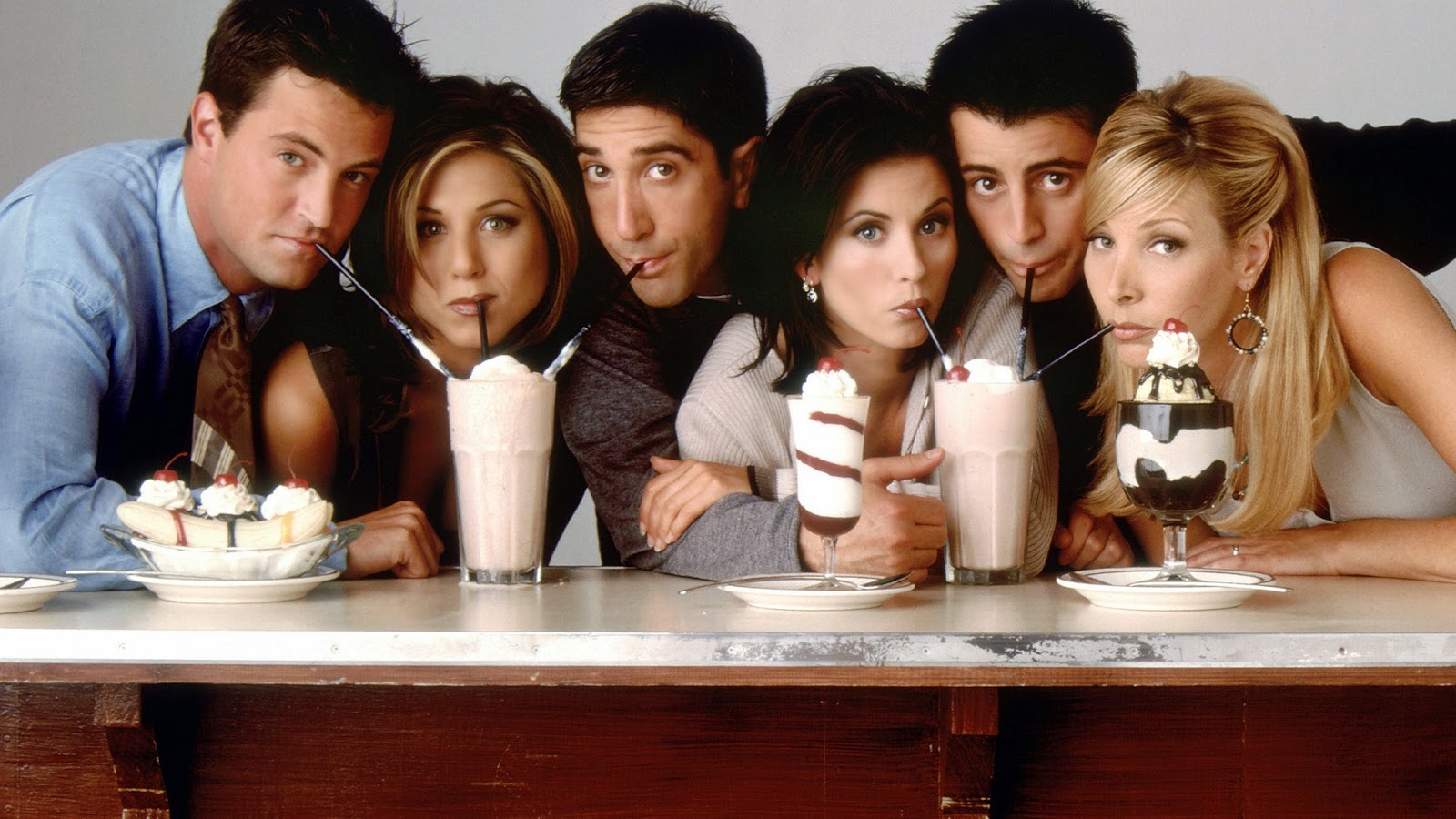 The overall feeling of Toy Guns is much like an episode of the television program Friends from the 1990s combined with an episode of Glee. Some of the wittier dialogue may even evoke the television show Big Bang Theory. The humour and delivery are similarly paced and on a similar intellectual level, the performers are young, the hair is reasonably well coiffed. Pop songs are used throughout, the more sombre moments are generally represented with a dance soliloquy to a sad pop ballad. The compositional formula that Hastey follows is more like musical theatre, in that it alternates theatrical sequences with showy dance sequences,  which may or may not have anything to do with the theatrical scenes. The substance of the scenes consist of random post-university ennui, PG-13 sexual innuendo, and some dead-panned verbal exchanges—such as a game of Go Fish—presumably to add an element of surreality. Just when it starts to get a little sad or lonely, something hilarious happens. Predictably, just when it starts to get cheerful, someone’s feelings get hurt. One exchange involves a motif that keeps coming up in theatre lately, where peers are stoically pitted against each other in catty comparisons and criticisms. Questions like, “Who is prettier? Who is more sincere?” or “What do you think of Jim?” (nasty response) “What do you think of Hilary?” (envious response). Though overused in performance lately, these questions feel relevant in a world dominated by social media which extend these sorts of junior high insecurities well into adulthood.

The style of dance Hastey uses is best described as ballet mixed with lyrical jazz, or better yet, studio contemporary. It’s the kind of thing seen on competition dance shows and in strip mall dance schools, with front windows loaded with dance trophies. Dancers from these recital-based studios emphasize precision, flash, and flexibility as much as costume and makeup requirements. They are notoriously lacking in depth, authenticity, subtlety, or art.

Certainly this sort of training or aesthetic is very far from the spirit of Pina Bausch or Yanira Castro. These choreographers do have heavy physical and psychological demands of their artists, but their approach comes from less presentational forms and more from experimental and original movement concepts and processes. Despite a couple blatant rip-offs from Bausch’s dance theatre elements -- formal wear for the dancers, the mountain of pillows receiving a similar treatment as the roses from Der Fensterputzer -- her spirit is nowhere to be found in this work. 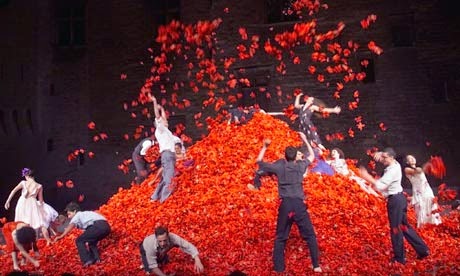 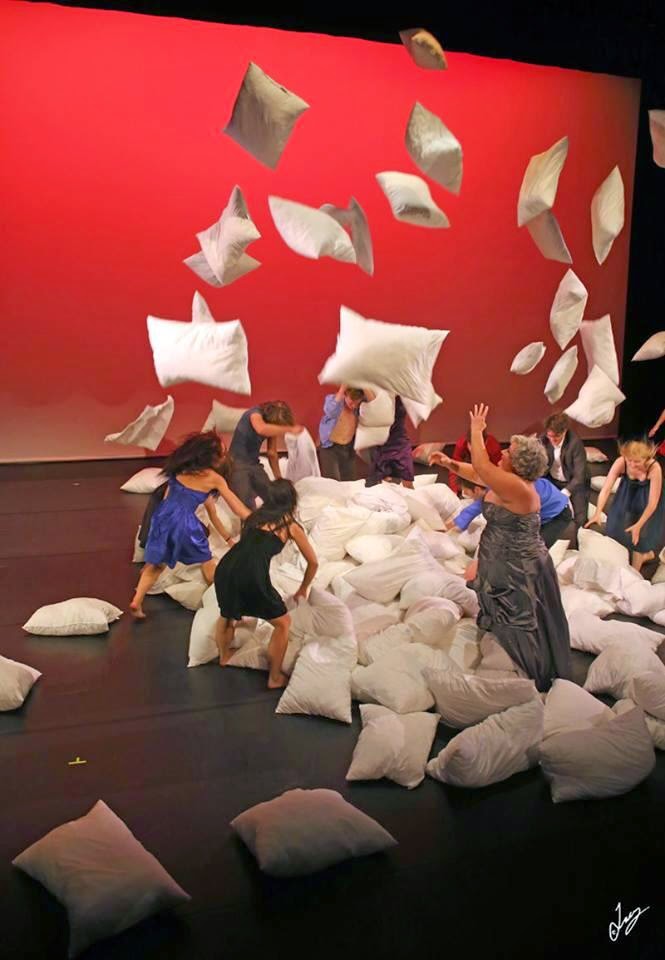 And yet, audiences love a Toy Guns kind of dance show. There’s nothing particularly challenging in the subject matter, you can just sit back and enjoy hot young bodies frequently stripping down to underwear and doing lyrical jazz. The hardest part for a mainstream audience will be the occasional same-sex pairings, but these are generally glossed over like the other themes. Only the dancers in the audience will cringe when Propylene Glycol choreography includes a tired and true tombé, pas de bourée, glissade, piqué arabesque-type combination. One movement phrase that is actually interesting features a young woman who dances a brief circle that turns on itself before she backs up and falls onto the hands of a young man lying on the ground. It is a difficult move to transition into and out of, and the surprising fall is initially breathtaking. Then the phrase loses its power as it is repeated over and over with her falling onto each man lying on the floor. If the movement is meant to suggest philandering and failure through this repetition with multiple partners, it succeeds in becoming predictable and progressively disappointing.

The donning and doffing of clothes down to underwear happens so much that when they finally do it yet again in the final dance number to that Mumford & Sons hit, you don’t even care anymore, and they don’t seem to either.

The visuals of a couch and flashlights in a public park are entertaining, as are the 300 pillows. After seeing the pillows used throughout the dance as props of comfort and battle, it is a pleasing ending to see the company all end up as friends in the end, making a large pillow mountain and doing victorious stag leaps into it.

It’s clear a lot of time and energy went into making these precise pieces, and the audience was very appreciative of this energy.  It’s understandable why Toy Guns was a so popular at the Edmonton Fringe this year. The work is solidly constructed, and it offers great accessibility for an audience looking for sit-com level subject matter that would otherwise be intimidated or bored by more challenging work. Both Toy Guns Dance Theatre performances gave the sense that the director and performers were in control of their performance. In the absence of a deeper message or delivery, the show biz-oriented Hastey should be encouraged that his formula for dance theatre works well, particularly for an Edmonton International Fringe Festival audience.