Walking into the Westbury Theatre lobby, a sheet of paper covering a large portion of the floor is seen. Covered in bright paint, we see the marks of bodies stepping and smearing across the page, a colourful remnant of dress rehearsal the night before, presumably the body-TRAKS.

Olivares’ new company consists of all men. This is not typical and is a bold choice to go forth with. There is a small but strong history of all-male companies, such as American choreographer Ted Shawn and his Men Dancers from the early days of modern dance in the Depression Era: 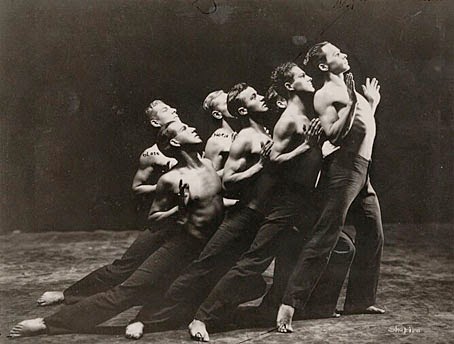 and the and the long-running ballet parody Les Ballets Trockadero de Monte Carlo, affectionately known as The Trocks.

As the lights come up, Martin Johann Kloppers is centre stage with his cellotaur, a bright red electrified cello in the shape of a ribcage. Kloppers wears ultrawide pants and an open shirt. His music for this show runs the gamut between New Age and Celtic to classical music/rock fusion – the kind often enhanced by pyrotechnics and light shows. He is a decent player, perhaps inspired a bit by the style and virtuosity of Joe Satriani, though Gob Bluth  also comes to mind.
The first section of the body-TRAKS consists of the dancers one by one walking onto the stage to present themselves to the audience. Each dancer gets a solo of sorts to demonstrate their prowess as individuals. Topless and wearing blue jeans, the men take turns performing leaps, turns and dives, making sustained displays of muscular stretches followed by stalking crawls and advances. The poses move from bravado to graceful capitulations. We see lurches followed by ripples through the torso, tours jeté land with slow, sustained follow through. The back of the hand is often important. Shoulder stands peak and fall into a throbbing crumple. These are not directed at one another as much as to the audience, or perhaps to the floor, or an invisible force. They do rarely make
visual or tactile contact with each other, but the feeling seems to be one of general harmony within the newly-marked territory. The flow of the movement and the spatial relationships are not particularly remarkable, but are well-designed and organic, like a group of men going through a daily routine that just happens to contain some lovely moves. It’s pleasant to watch. 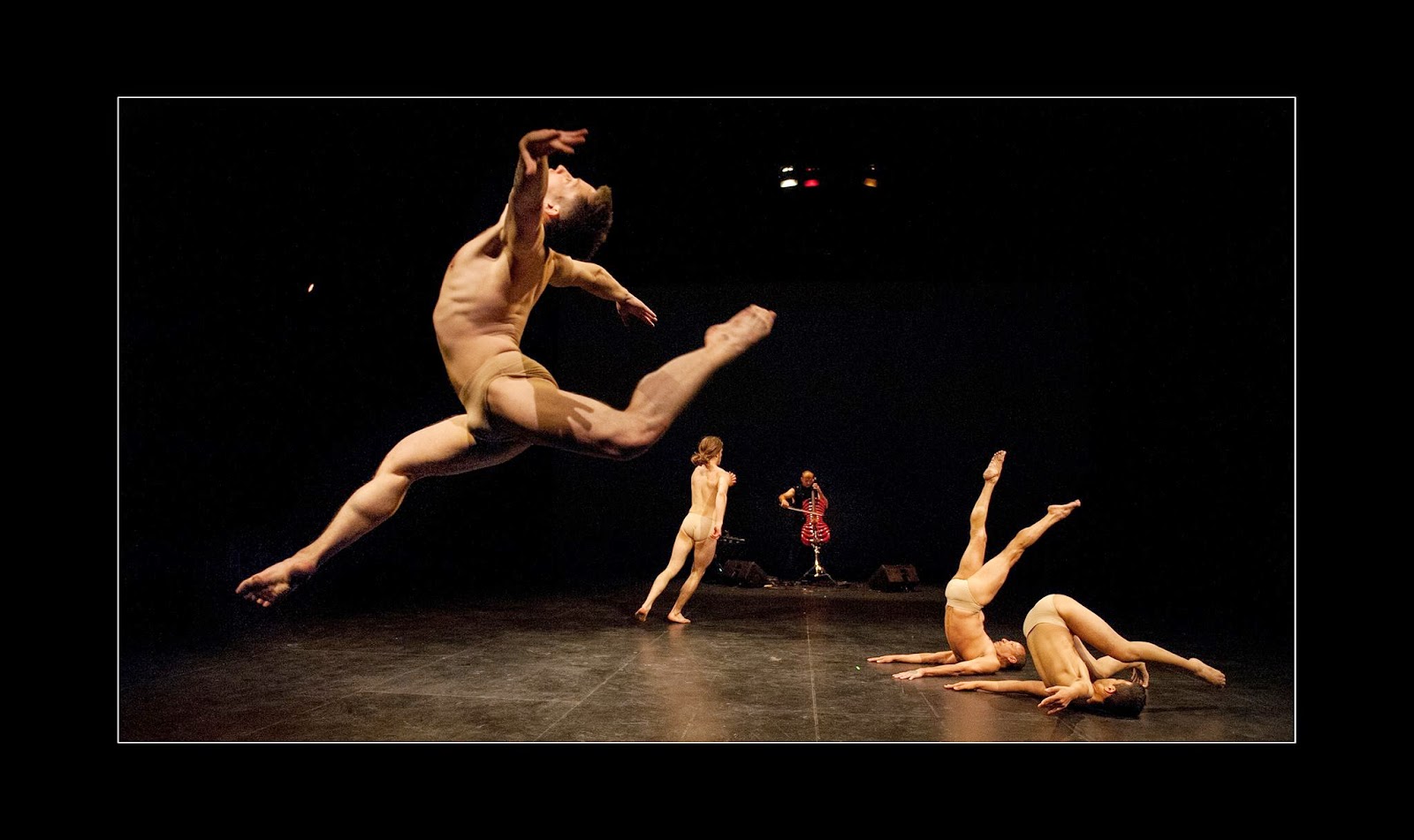 There are also some flaws here. Blue jeans are a popular look in contemporary dance, but are notoriously stiff to dance in. To make up for this, some of the costumes are ill-fitting. Dance support belts are seen at the hip line with tags, and some of the dancers are still stained with paint from the dress rehearsal. Olivares himself seems unusually tentative and injured, a bandage on one foot. He is often seen looking down at the floor, which is not usual for him in solo performances where a strong focus is often present.

The music changes and the pants all come off and the dancers are down to just dance belts. The dancing continues with skims that suddenly drop to the floor, sharp slices at the air followed by rondes des jambes. We are now able to appreciate the lower half of the male dancers’ musculature, as well as bruises and more intimate tattoos.


Of Olivares’ dancers, Wolchansky brings his considerable ballet training to the piece. Romero is more influenced by jazz. Etherington seems to come more from contact improv dance spiced with martial arts training. Nearly nude, the dancers continue to dance, including leaps and near-misses controlled falls. Romero appears to have improved technically since some previous performances you may have seen him in. He is generally a very loose and flexible dancer, which often compromises strength and stability. In this performance he seems to have better control through transitions and while still a very young dancer, seems to have matured in his general stage presence.

In the second section of the piece, Olivares brings out a giant roll of paper. The paper is unrolled from upstage to downstage, and the men begin to secure the paper to the floor with tape, and the piece has a sort of commercial break. This seems to not have been rehearsed well as there is some fumbling through this. Even though Kloppers continues playing, it takes us out of the psychology of the world they have created for us, and it takes a really long time. At one point Olivares runs out of tape and he looks visibly irritated. Without any back up tape, duct tape is substituted for one section of the paper. The audience gives up watching and begins to chit chat

Meanwhile, a DVD menu appears on a large projection in the back of the stage behind Kloppers. As the dancers ceremoniously bring out bowls of coloured paint (lime green, teal, purple and pink), the music finally dies down and the men begin pouring paint onto the paper, which is one of the more interesting sonic moments in the show. A piano recording comes on, and the screen at the back of the stage now reveals an overhead view of the canvas.

The dancers begin to engage with the paint. They experiment with colour on themselves and on the floor. This is visually vibrant in the live aspect of the piece, but the video is a problem. In fact, video with dance is almost always a problem. In this case, the usual problem is balancing the amount of light needed for the camera to pick up the colour can not be reconciled with the amount of darkness needed at the back of the theatre to be able to see the video. The resulting effect is a near-monochromatic video of a very colourful display.

As the dancers begin to dance, another problem becomes clear – the colours of the paint on the paper and body are visually satisfying, but now the stage is a slippery mess and the dancers are very tentative on it. So, as the music drives its Celtic rock jig, seemingly toward a climax of colour and celebration, the dancers respond to the floor situation with comparatively low energy. 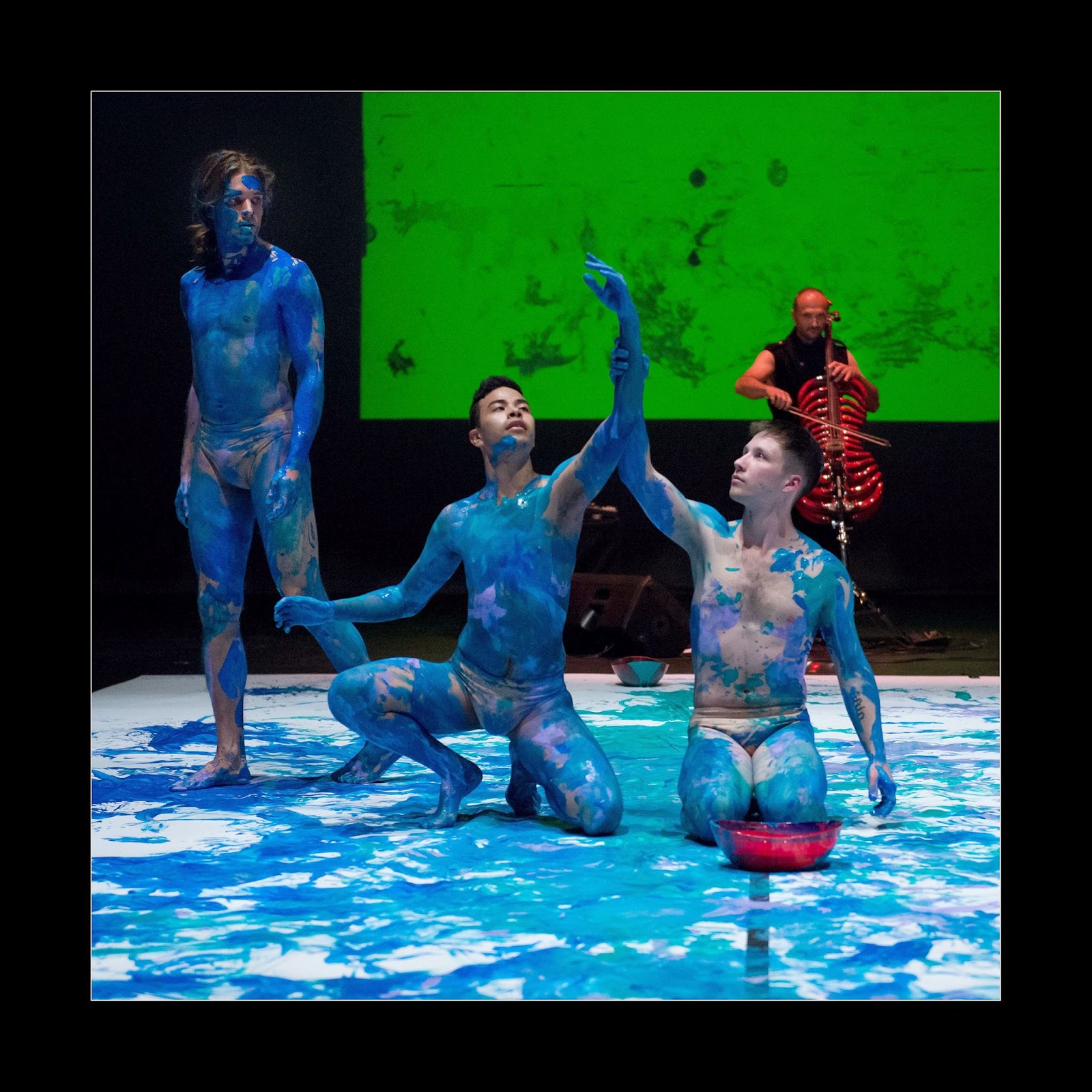 Watching the video is a completely useless distraction, and it was much better to watch some of the small details such as one dancer throwing paint onto the paper with a particularly interesting wiggling and flicking gesture.

The music turns heroic and you might be envisioning Mel Gibson riding Falkor into the theatre. Instead, Olivares has obtained what appears to be the highest offering of a bowl of red paint. He holds it up above his head toward the projection as if it is an altar before turning and presenting it down in the centre of the paper. The four men gather, each facing the Four Directions. They kneel facing the bowl and Olivares pours the paint and on himself and on the others. A bit of the paint makes it to the canvas.  For the amount of ceremony attached to this red bowl, a brief and tentative communal dance happens on the slippery floor, and the dance ends.


The title, body-TRAKS seems to suggest that the piece is really just about the movement with the paint, and the resulting marks on the page that offer a visual history. Whatever ceremoniousness built into the choreography is not particularly important or unimportant other than to formalize the necessary getting-of-paint. At times there seems to be a collective male aspect to a sort of tribe without any particularly strong or meaningful connections between the men other than to partake in this activity. While there is some individuality expressed through the various styles of movement, there are no specifics of who these men are and who they are to each other. Only occasionally do they look at each other, touch each other, or move together.

While having a relatively complex collaborative aspect of the performance, the concept and structure for the piece are rather simple, and perhaps not fully realized in this work. The paint is potentially a strong visual image which has been much more successful in Olivares’ previous solo work. In this case, the paint was engaged with in the same way that most dance and performance art involving paint (or milk or blood or other liquids) are - with a personal exploration of the substance, a decoration of the body, and the subsequent interaction of a medium using the body as the tool of dispersion. In Olivares’ other work, he has more fully realized his characters (though they remain mysterious) and the paint adds a more clear otherworldly or primordial aspect to them.

This is an ambitious début for Tony Olivares Dance. Of particular interest is Olivares’ vision for the aesthetic of the male body. In a time when magazines feature barely clothed women next to fully clothed men, and the beaches are full of men wearing shapeless bathing suits that cover the leg to the knee, the male body and how we feel about it remains a taboo subject, while the female body is merely controversial. It will be very interesting in the next years to see how this company develops in the small but burgeoning Edmonton contemporary dance scene, and within the larger dance community as a genre rarity.
Posted by JenMesch at 18:11