The University of Alberta does not have a dance major program, which is a lose-lose situation for the vibrancy of dance in Edmonton and the entire province. There is much to be said about this. Still, the Orchesis Dance Society does an amazing job of offering a fine recreational dance program to its students,with an impressive faculty that offers the Big 3 of western aesthetic dance (ballet, jazz, contemporary/modern) as well as other movement forms such as belly dancing.

Resurrected Motifs is a set of 4 dances by choreographers who are or have been part of the society. Which brings us to the slight problem of the name. In The Fringe, artists are vying for the attention of Fringe-goers who sometimes just scan the program for an interesting title to jump out and make them want to see it. The title here suggests that the company is bringing back ideas that used to be dead. But, titles don’t necessarily indicate the quality of the performances. 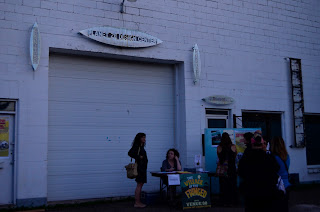 First of all, it’s in an unbelievably cool space, perhaps it was a large auto body shop

that has been transformed into a fashion and design workspace with a shiny, groovy bar set up and a runway for fashion shows. The performers made use of the unusual long, narrow stage.

It’s generally an interesting choice to have performers in place or already doing things as the audience filters in. In Howl, the runway is covered with a long length of insulation plastic.  Perry is at the upstage end, lying calmly on her right side. 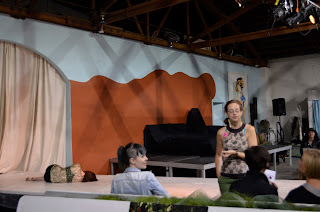 As the lights change, Perry gets onto all fours and seems to be exploring what the plastic feels like under her hands. The sound accompaniment seems to be playing, and it sounds like ambient room noise amplified. It creates an eerie bit of tension in the air despite the extreme subtlety.

Perry’s gaze darts from side to side as if something is out there in the dark. This seems to agitate her and she begins doing some kneeling side curves that circle enough to give her the momentum to get off the floor from a kneeling position. As she does so, the jump undulates through her side-curved spine and she becomes entangled in the plastic. The poem begins, and the rest of the piece is a dance of negotiating the plastic, advancing and retreating down the runway. It’s messy at times with the plastic which has a mind of its own, but then she seems to kick the plastic into a surprisingly great outfit, gracefully wrapped around a leg, the waist and an arm. At one point it becomes almost bridal. 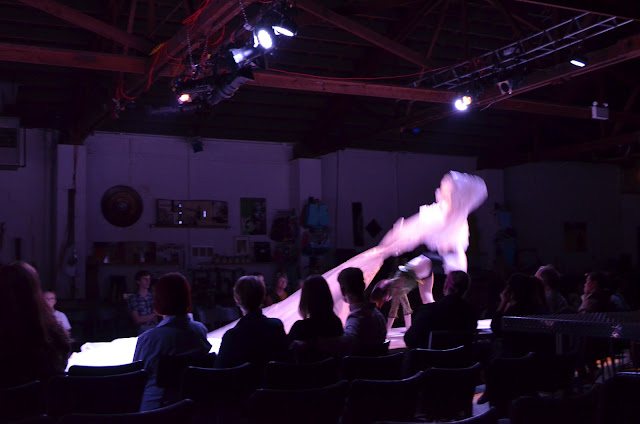 The dancing is often rather active, jumping from one move to the next within the plastic. Perry begins to wrap a tiny bit of it around her hand. It starts getting bigger and becomes a bit of a plastic boxing glove. It gets bigger still, but we might wish she had continued until the entire length of the plastic is around her hand and arm. The careful wrapping suddenly stops and the plastic is tossed off the arm and back to the floor. She ends the piece when she’s wrapped in a sort of cocoon, lying again on her side. 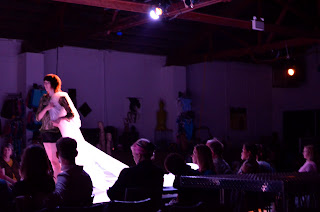 It’s curious that Acton has her character start out by darting her glance fearfully, as though there is a sound in the darkness of the woods. As the piece progresses however, Perry almost continuously looks at the plastic and the floor. It's not clear what is a source of fear here, and it’s not clear what the purpose of the plastic is, perhaps a complicated toy for this animal that Perry seems to be.

Having Howl read by a young-sounding woman is an interesting turn considering the point of view of the poem. While the hum of the recording before the speaking starts is an interesting sonic component, the voice recording is not terrific (it sounds like they attempted a clear recording, rather than going for a low-fi sound). Howl the poem is frequently performed, referenced and analysed, so the use of it in this piece could come off to some as over-used, and this may be intentional on Acton's part. Making a piece involving the poem and have it add fresh meaning to its long, sordid history is a challenge.

Large sheets of plastic have been used a lot recently for dance in Edmonton. Gerry Morita did a piece with plastic for her work Flotsam, which performed around Edmonton and Alberta from about 2005 until 2008:

The Good Women Dance collective also used a sheet of plastic for their work Pod this past spring:

In Acton's Howl, Perry begins outside of the plastic but ends up in side of it.

In all three works, the plastic at some point seems to take on a life of its own, at times a comfort or a burden.

A collection of Grimm tales adapted for dance, the piece has an enormous cast (18 dancers) and elaborate costumes that are sometimes beautiful: 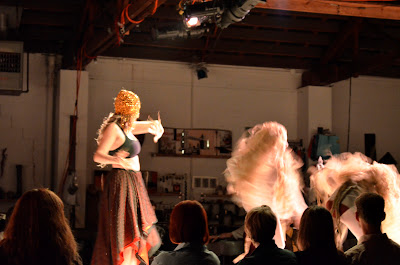 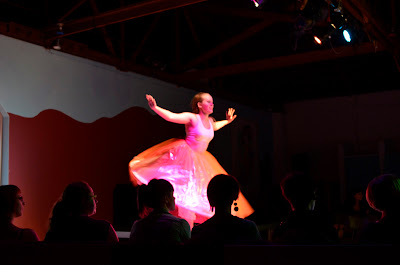 In fact there are many costumes, and more than one set of characters make use of sports bras, allowing the audience to spend plenty of time deciphering a rather lengthy cursive tattoo on the midriff of one of the dancers.

The piece seems to be giving a performance opportunity for beginning and intermediate dancers in the Orchesis program. The choreography is a blend of rather straightforward ballet, jazz and contemporary vocabulary mixed with some character stage movement. Overall it comes off as a high school or civic theatre production, and despite the fact that the Resurrected Motifs program is essentially a dance recital, it feels unbalanced with the other 3 pieces in the program which are far more minimalist, in terms of performance and design.

Exuvia was reviewed previously on the Dance Conspiracy blog as part of Expanse festival. Please see this post for the review.

Tony Olivares has returned to Edmonton after 10 years. In this piece, which he has dedicated to a friend and colleague of his who passed away, he appears to us from the stage entrance, painted completely in white, holding 60 roses. He is wearing white, skin-like shorts that essentially free him of earthly entanglements. Glacially, Olivares advances forward, at first in silence, and then with the rich music. At times, he shifts his forward-facing position to a sideways forward walk and at this moment some might think of Ted Shawn and some of his early interests in Greek tragedy. 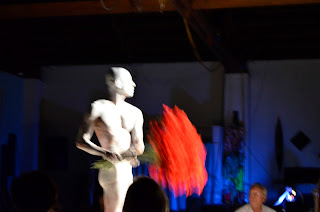 Tony continues to walk toward a light downstage that seems to be beckoning him there. He parts the roses into still-giant fists of flowers. When he gets to the brightest focus of light, he slowly offers the flowers. The offering becomes more intense as he stands there, changing in his body from a state of noble generosity to one of noble despair. 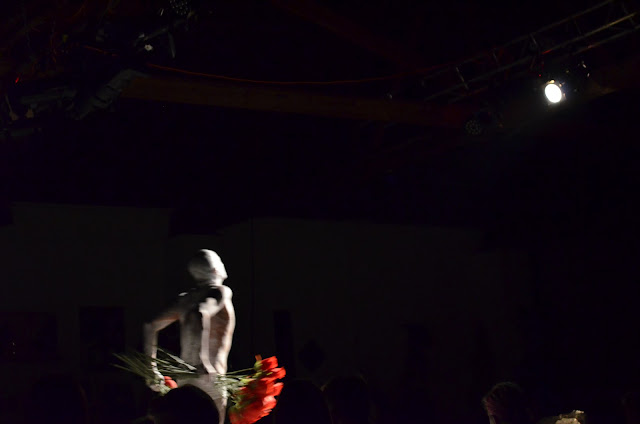 He begins to retreat slowly from the light, as he does, arms at his sides, the roses slowly fall from his fingers. Eventually he ends up with just one rose, which he slowly offers one more time. 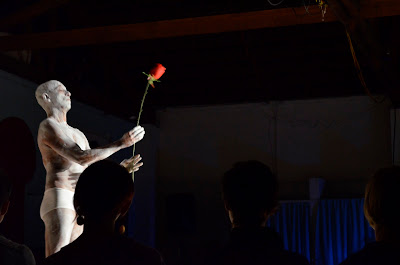 Tony then descends to the floor as though he were shot in slow motion. He luxuriates painfully in the roses. This sorrowful and all-encompassing dance of emotional pain also attempts to overcome the pain.

Olivares is surrounded by the roses and as he rises he pulls up fists-full of the roses, disordered and pointing every which way, still trying to make a bitter offering. At one point he begins to insert or "plant" the roses into the shorts he is wearing. While this is a striking image, it comes dangerously close to becoming comical, as he now has a row of long-stemmed and rather mobile flowers in his pants; pants we had not exactly ignored, but accepted as an alternative to total nudity. This use of the shorts forces them directly into our conscious minds as a wearable prop whether we like it or not. As Olivares continues moving, most of the roses wobble out of the shorts, aside from one almost certainly unintentional tail-like rose coming off the middle back of the shorts like a tail. Because Olivares succeeds so well in convincing us of the supreme importance of these roses, it is impossible to ignore this strong image, even if it only lasts for a few moments. And it does only last for a few moments, but we have to work a bit mentally to bring ourselves back into the drama.

Olivares is undeniably gorgeous and a pleasure to watch both as a male presence and as a dancer. The death in this piece is a long one, with many short, fast exhalations that punctuate some of the more percussive twists, turns and contractions that his body makes. He is able to draw us into every muscle of his physical being, which seem to be heroically (and artfully) taking on the pain in all of us.