Reviews of Exuvia, In Praise of the Humble Comma, Moon River, and Bad Betty of the Mine 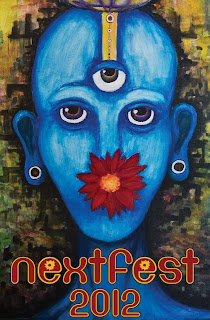 Nextfest is Edmonton's emerging artist festival. Mostly for artists under 30, it is a chance for young artists to be seen while they are defining themselves, and gives audiences an opportunity to see some fresh faces and to see artists working through an interesting phase in the development of their ideas and methods. To help them with this, there is a high school mentorship program, and many of the other artists pair up with an established mentor as well. Directed by Steve Pirot, genres represented in Nextfest are visual arts, film, theatre, play development, music (which is oddly separated into "music" and "nu-music") and of course, dance. Dancefest is curated by Cheryl Fontaine.


Highlights from Dancefest at Nextfest:

Exuvia
Choreographer: Anastasia Maywood
Dancers: Phil Kloc, Linsay Roseke, Larissa Swayze
Music: Nextfest does not do music credits. This is unfortunate on many levels. I don't remember what Maywood chose, but I recall it being appropriate, possibly with some sonar-like sounds.
Mentor: Ainsley Hillyard

Right off the bat, I think it would be good to know just at what level of emergence these choreographers and dancers are. Maywood has a master's degree in dance, so she is no beginner. And we see this in her piece, which appears to be an exploration of deep sea life. The lighting design helps us descend into the dark and briny deep. Three bodies enter, their arms lined in some kind of black light paint. Electric eels come to mind as the snake-like neon-striped arms swim through the dark air, occasionally making quick sharp claps that could be electric sparks. They shed their shirts and move from animal behaviour into more formal leg and arm gestures, turning and falling. Perhaps these beings that were once buoyant are now affected by the pressure of the deep water, with clunky exoskeletons skidding across the ocean floor. Eventually the creatures find their jellyfish-like outfits and awkwardly work their way in. The large skirts or funnels are made from chicken wire and plastic, some times coloured, sometimes clear, the creatures slow their pace to explore their new physical presence. The audience cracks up a bit at their preposterousness, and it's not clear if that was the desired response. However, this doesn't seem to be either a serious or humorous dance. Instead it's rather relaxing, like being mesmerised by watching fish in a big aquarium.


The Edmonton Journal was intrigued by the title of this piece, and what journalist wouldn't be? The idea of a dance about punctuation might lead one to anticipate a kind of grown up Electric Company fun. Instead, Perry, a young social worker who has taken on choreography as a dedicated hobby, has taken a more serious tone. A dancer pantexts while another types at a typewriter. The typing pantomime corresponds literally with the sound of typing that is emitted through the loudspeakers. Arms and legs are decorated in punctuation symbols. As the women remove themselves from their technology to engage each other, they begin to jump, turn and fall together in an effort to connect, tentatively approaching each other. Once they trust each other, they begin to pantomime writing things to each other, on the floor, in the air, on the wall behind them. The other follows along like a foreigner learning a strange new language. They dance again, but with more antagonism. When the dancers become self-conscious, we see they prefer their previous solitude and return to their respective technology. The piece ends as they occasionally glance back toward the other as they type.

If one person came away from this feeling a bit sad things didn't work out for the gals, another might have identified with the need for space after an awkward relationship. This piece is not so much about punctuation as it is a commentary of how technology and communication keep us from engaging each other directly (the anachronistic technologies are perhaps a subplot, but not a fully developed one).

Last year Perry presented a very large cast and a ninja-themed social awareness angle. A common thread in Perry's work is the dancers arms and legs decorated with handwriting, though the ninjas' bodies instead bore words of empowerment. Taking it down a notch in terms of set, choreography and number of dancers seems to allow Perry the opportunity to develop individual characters, a good choice for a young choreographer with a deep interest in human interaction.


Moon River
Choreographer and Dancer: Jeannie Vandekerkhove
Music: A Capella vocals by Vandekerkhove, Moon River sung by Audrey Hepburn (movie soundtrack). (This information was not in the program.)

This gender-bending solo had its debut in March a the Expanse Movement Festival cabaret on opening night here in Edmonton. Vandekerkhove has continued to hone this piece for this festival. She is an accomplished dancer and choreographer, but this piece represents an experimentation in performance art for her. A long, tall drink of water, her character staggers drunkenly onto the stage in an awkward evening gown and what could only be called an abundance of wigs covering her head and most of her face. There is no music, only the sound of irregular high heels and sparkly fabric. She takes her time getting to the microphone while creating the atmosphere of a seedy cabaret at about 2 am. She takes a long drink from a bottle of booze and smokes a (fake) cigarette while making unladylike outfit adjustments.

She clears her smoker's cough and with her back to us, she begins singing Moon River. Her breathy voice is actually sweet enough to call to mind Hepburn herself. But rather than staring dreamily through a window as she sings, Vanderkerkhove's character is busy trying to maintain her balance while working her way out of a surprising number of clothing layers. As the audience chuckles at the scene she starts to overdo it a bit, but she pulls it back just in time for the best part of the number: With the movie soundtrack Moon River playing, she seductively moves her hips as she holds the zipper at the back of her of her floor-length skirt. She unzips it, and just as it seems we're about to get more of a show than we expected at Nextfest, instead of sliding it down, she brings it up and then disappears completely down into its fabric, to great comic effect. A naughty tête-á-tête seems to be happening in there with girly squeals and manly chuckles. But then, as though the skirt is some kind of tardis, Vandekerkhove emerges as a short-haired James Dean-type chap. Somehow this low-tech transformation manages to convince us that somehow this dude has arrived from some other Lynchian dimension.  He takes a comb to his head with Fonzarelli-like precision. He then similarly adjusts his clothing, assumes manly poses and smokes a cigarette as the music ends.

Those familiar with Vandekerkhove's virtuosity might feel robbed of seeing her dance a "dancey-dance" when watching this. However it is refreshing to see someone who moves very well using their body to present a sort of non-verbal theatre, especially in a festival situation where dance-goers might see 10-25 dances over the course of a few nights, with most pieces demonstrating rehearsed steps and leaps. Vandekerkhove's characters and surreal cabaret call to mind the work of avant garde cabaret artist Meow Meow in that they work within a similar shade of psychological darkness and bring unexpected situations to an otherwise predictable and antiquated form of entertainment. Vandekerkhove is very comfortable in drag, which it seems both characters are. There are certainly questions to ask of this piece, mostly because the characters, though simple, are so strange.


Bad Betty of the Mine
Choreographer and Dancer: Susan Kania
Music: Credits not given by Nextfest!
(a review)

Thank heavens for Bad Betty of the Mine, a solo by Edmonton's best kept secret, Susan Kania. We think she studied and spent some time performing in Vancouver, and is now in Edmonton doing landscaping work by day. She was impressive last year at Nextfest in Barbara Murray's choreography, and she hasn't been heard from very much since then. I'm not sure if she belongs in an "emerging artist" show, but nonetheless, this is where we have a chance to see her.

In dim amber light she comes out wearing a sepia-toned dress and big old brown boots. There are some yodeling cattle calling sounds heard as she advances slowly, carrying a heavy lantern in one hand while doing a stiff and quirky arm dance in with the other. Her shoulder, elbow and wrist articulate the rhythms of the calls, hear face serious, her head occasionally almost bird-like. As the music fades she sets down her lantern, takes off her heavy boots and lets her messy hair down. She does a sensual yet purposefully awkward dance, showing some leg and allowing her dress to fall to her head as she inverts her body. In another section we see Betty in a full-on work dance. This is a dance of effort and sweat with occasional lightness. Something to get through but in a satisfying way. Betty finds her boots again in the last section. She eases her hands into the boots and she plays out a chunky dance which includes can-can. Her arms initiate the steps, her legs and pelvis are compelled to follow them gracefully, accompanied by a old-time mining song. Tired, Betty slides her hands out of her boots and slides her feet back into them. We get the idea that she has sufficiently amused herself in a day's work. Sweaty and mussed, she makes a disinterested, yet slightly sassy exit.