The Edmonton International Fringe Theatre Festival began in 1982, and is the oldest and largest in North America, based on ticket sales of 104,142 to over 200 indoor shows, with an estimated outdoor site attendance of 576,000. It's huge.


This is Still Not A Play
Good Women Dance Collective
Bring Your Own Venue (BYOV) 31: TACO Space by Punctuate!

Dance performances at The Fringe tend to work like other dance performances, presenting several dance pieces within the space of the show. Two years ago, Good Women presented "This Is Not A Play," in order to distinguish themselves from the theatre crowd. Performance practise definitions are more blurry than ever (performance art, wordless plays, dance theatre, dances that use text, etc). Yet the recent work of Good Women shows that their recent involvement with theatre productions have informed their own sense of theatre and plot in their own work.

Face Time is a work-in-progress which literally uses FaceTime as a way of communicating within the piece. FaceTime is video calling software by Apple which assures in their advertising that you can "be in two places at once." As the piece begins, we see Nyquist-Schultz mostly on hands and knees in an active and precise dance of flailing motions which recover with paused gazes at the floor or hands. As she does this, Hillyard prepares the space for a video call, pulling down a projection screen and setting up a little work space. Kause enters, a call is made, and the interaction begins. In this case, Hillyard uses FaceTime to tell the dancers what to do. This is a flashback to another less-developed piece by Good Women where they projected dance instructions to each other via text onto the dancers white-costumed bodies. In fact, the image used for that previous piece is the used in the program.

As the dancers make video contact, Hillyard appears to be seated confidently and begins to tell Kause which parts of the choreography she wants to see, and from what viewpoint. 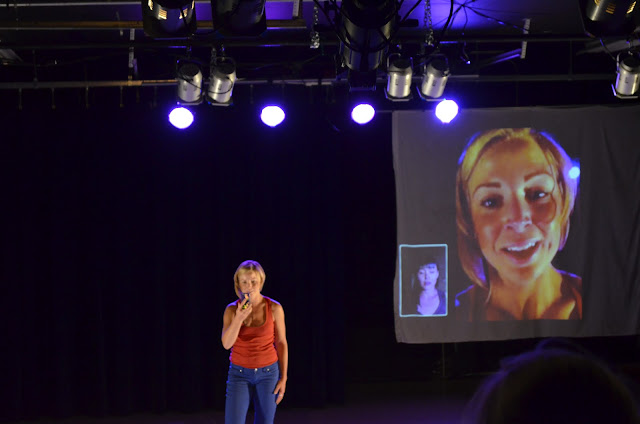 Kause adjusts the FaceTime effects or holds the camera just so, allowing us a different viewpoint of her performance. Then Hillyard tells Alison to finish the choreography with a fall backward. When Kause seems concerned for her own safety, Hillyard says,

This is comical, yet threatening. We know that Hillyard is actually just off to the side of the stage, mostly out of our sight. But we might also realise that we think of these video conferencing tools as bringing us closer, in this case it creates a psychological distance. We know Hillyard won't be there when she falls. Her image is sent to space, captured and sent back to Kause's phone via satellite. The set up for this works well, and we feel nervous for the trusting Kause, a little irritated by the smug Hillyard. The choreography is moved through, and Kause stands ready to fall. As she does, FaceTime cuts out.

The piece continues through further sections and explores more scenarios of technological disconnect paralleled with a bit of the "gee whiz" factor of what technology allows us to do (angles and effects vs. delays and distractions, for example). Face Time is one of the more successful communications technology pieces I have seen to date. The commentary hints at the deeper problems of technology without being overly sentimental, goofy, nerdy or preachy. The dialogue is well-written and well-timed. It's an intense moment when Kause falls and Hillyard is not there to catch her. A more believable fall by Kause would make for a stronger statement here, though one can't blame her for being a bit tentative with nine more shows in the run (ow!). Another memorable moment is when Hillyard requires Nyquist-Schultz to sync-up the video feedback layers of herself. As she busily dances she manages to respond,

reminding us of the disembodiment of our own images and messages as they come hurling in from space.


Stashko is not in the core group of Good Women Dance Collective, but they’ve featured her in significant roles in other pieces. Here they’ve given her the space to present her own work entirely. Irene is a character sketch dance of a lovely but disturbed woman. She sneaks into a room that is empty save for a wooden chair that she seems nervous to approach.  We get the idea that she is not quite right by her entrance, in which she is crouched and searching suspiciously around the room. She is wearing an odd combination of a lightweight black asymmetric skirt, and a loose black tank top. Over the tank top she has a matronly beige and white checked tweed jacket. She’s wearing black dress shoes, or more probably character shoes worn for musical theatre and ballroom dancing. It’s an odd combination. Irene also has a sleek haircut, which of course is also Stashko’s haircut; a dark, short asymmetric bob.

This costume mention is important firstly because Stashko specifically mentions that she designed it, and also because it's not immediately apparent who this character is through the costume design. But more on this in a moment. 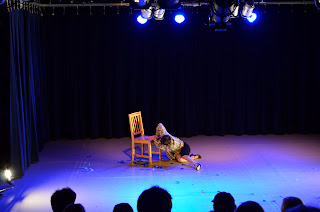 Irene makes it to the chair, and sits. As she does, her jacket opens and we notice that from a hidden crease in the front of her top, she has many dark blue feathers. As she cantalevers her upper body from her seated position, the feathers begin to fall to the floor. As this happens, it’s as though the floor has begun to move and is trying to sweep her feet away. She hangs onto the chair for dear life as the floor, or maybe it’s just her shoes, try to get away from her. 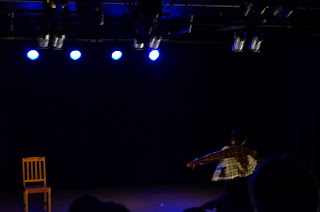 She struggles like this for a long time before she lets go of the chair and is moved to do a strenuous and nervous dance of repetitive inward tornadoes and skilled but purposefully unwieldy leaps and jumps. As she exerts herself, we see that from her sleeves, more feathers are emerging and flying out and to the ground. Soon the floor is quite decorated with feathers. She seems to want to be rid of them, or at least to set them free.

During this mad scene, there are moments of clarity for Irene, and sometimes she suddenly sees the audience members’ faces, taking time to look at them with a mildly bewildered eye. One of Irene’s ticks is that she stares suddenly and makes little shakes and nods of her head. These shakes then continue through her body. She takes off her shoes for another bit of madness. At this point it’s hard to tell if Stashko slips out of character to perform some of the more formal and technical moments in the piece (Stashko is a highly trained in ballet) with some spectacular graceful jumps. Or perhaps, Irene is actually capable of such grace at times, and this relates back to the costume and the mix of graceful, if loose, artsy black outfit with the matronly bolero jacket. It's as though she may be a mentally ill high school English teacher. 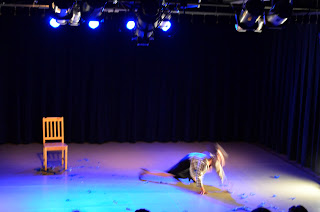 The music changes, and Irene puts her shoes back on. Irene now has a faint sheepish smile on her face. She again nods and shakes, she does a more tired little inward tornado dance. She backs away from us slowly as the lights fade, a slightly mad smile is on her face. Her hands are slightly stretched out to us, as if needing something from us, but her retreat suggests she really doesn’t want whatever we might be willing to give.

Counterpart had its debut in December, but the Good Women are bringing it back for Fringe audiences to enjoy. The lighting design is quite dark, with the exception of a thin bar of white light that cuts a diagonal from downstage right to upstage left. The piece is a sinister dance of chirality, mimicry and mockery. The dancers enter wearing tight black pants and tight black tank tops that are cut to the navel down the middle revealing the center of the chest through black mesh. The dancers approach the line and each other, the line acting as a mirror or portal or trans-dimensional force field. They mirror each other for some time with precision, an element of threat is present. The movement is strong and vaguely sexy, with lots of whiplash actions that resolve with a sense of pressure bearing down on the duo. They frequently pause for long periods to peer at each other, watching and waiting.

As they explore their boundary and test the mimicking, at some point it becomes clear that one is somehow allowed to be slightly dominant, trying to make the other move in ways she doesn’t want to. Their synchronisation becomes distorted as the second dancer fails to catch up. When they try to go back to mirroring each other, it doesn’t always work and they become more and more in opposition. Eventually the other dancer decides to stop the game and the controller becomes the controlled. 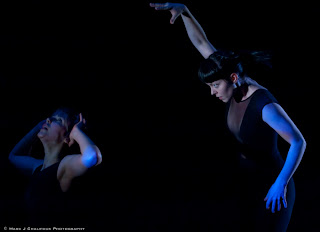 The movement in all the sections consist of active floor movements that splash out and recoil, many seem to quote hip hop or other street dancing forms. The choreography also brings these movements to crouching and taut standing positions that feel simultaneously confrontational and defensive. As the audience, we don’t know who will be next in charge, and we get the idea that the characters are treading new territory themselves.

The most interesting section is after the light line vanishes. Nyquist-Schultz who dominated earlier is now somewhat beaten down. As lights come up she is now on the other side of where the line was. She almost seems blind in this world and she begins moving again. Hillyard’s character comes out and is in the controlling position again, though it seems Nyquist-Schultz can only sense that she is there but can't see her. Hillyard follows her slowly and forces her to retreat. She plays menacing tricks as Nyquist-Schultz navigates this new psychological space. She seems traumatized, but seems to accept defeat in a way. The antics escalate into more of a brawl with complex pushing and shoving motions. Exhausted, they both retreat. The light line returns and the two Good Women find themselves on opposite sides of the line from where they began, perhaps a bit like the film Mulholland Drive. 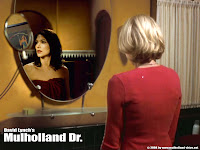 Hair seems like an important part of the choreography and costume for Counterpart, as it colourfully punctuates much of the whiplash movements, but is also distracting at times. Sexuality is implied through the costumes, the battle scene, and the long stares. The dancers move well together, and it's interesting to see their movement differences which are somewhat amplified during the unison sections. However the differences are only one clue in the mystery of whether these two are separate individuals, an entity within an entity, or if one is completely imagined.

Resurrected Motifs, A Wake, Little Lady and Afterlives
Posted by JenMesch at 15:37