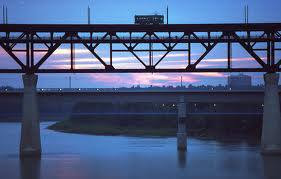 The High Level Bridge streetcar ride is one of the best things you can possibly do in Edmonton. It's inexpensive, there is an introduction to the city's transit history, there are unparalleled views of the river and its city, and the people who drive the cars and take the tickets are passionate about the history of streetcars and about Edmonton. As the streetcar enters a graffiti-covered tunnel, the conductor fondly calls the tunnel the art gallery. If you go first thing in the morning, they respectfully wait for the artists to safely leave the tunnel before venturing through.

And, they allow events on the streetcars. You can have a wedding, and you can have a dance performance, which is precisely what Mile Zero Dance did. 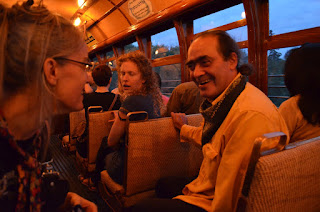 The evening was very community oriented, with a lot of die hard Mile Zero supporters and dancers in the audience. Morita and Olivares, strong improvisors both in or out of contact, performed lovely solos and duets, that were sensual and engaging, but not necessarily romantic. Morita managed her  long and high extensions, barely clearly hanging the vintagey light bulbs with the tips of her toes. Olivares cut through the space seductively. Both freely expressed their joy as they navigated the tight spaces through the aisle of the street car, at times diving and expanding close to the faces of onlookers - the onus was on them to move out of their way. 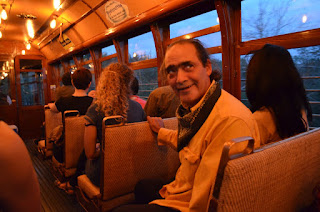 The streetcar journey is generally the same, the car goes past the largest community garden in the city, and they point out where the previous streetcar tracks were. The streetcar makes a stop and waits on the north side near the legislature building, and Mile Zero took the opportunity for the timing stop to dance outside the car, and mingle with the audience. 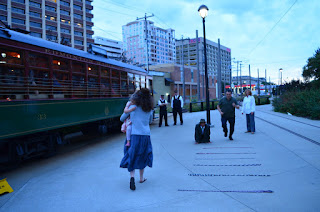 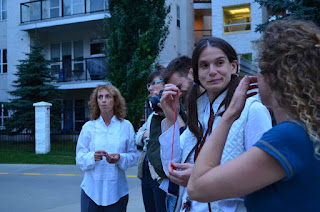 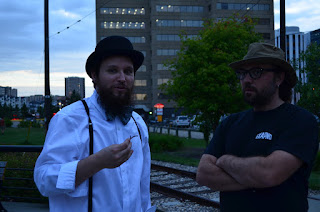 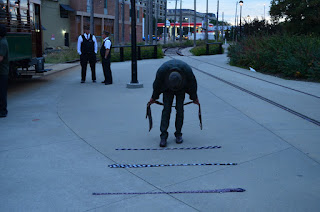 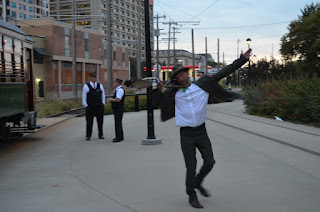 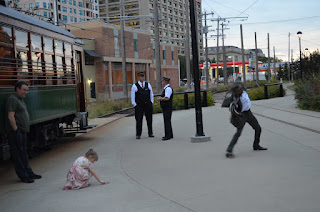 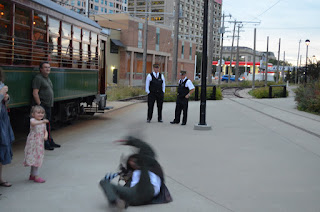 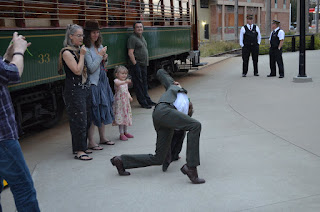 The performance then went back over the bridge and stayed in the middle, high over the North Saskatchewan River, for part performance, part dance party. 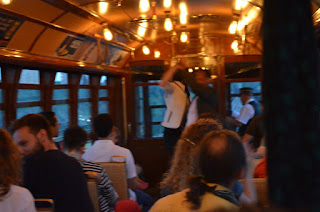 Posted by JenMesch at 15:50 No comments:

It was a respectable first try.

This co-production resulted when Michael Zaugg, director of the excellent choir, Pro Coro, approached Good Women Dance Collective about performing love fail. Together they pitched the project to New Music Edmonton for their season of performances. The appeal, it seems, was the idea of matching the four Good Women on stage with the four female voices love fail was composed for. It was a first collaboration of this sort for both ensembles.

love fail was written in 2012 by Pulitzer Prize winning, Yale professor, and Bang on a Can composer David Lang.  Lang is relatively well-known in Canadian dance for writing music for La La La Human Steps', Amelia (2002).

love fail is stated to be based on Tristan and Isolde, an ancient Celtic story of love potion induced adultery with much drama. More recently, the story was told through Richard Wagner's famous opera of the same name. This opera is standard syllabus material for university composition and history study, and is considered one of the most influential pieces of music to bridge 19th century music to the 20th. Wagner's Tristan even gets a chord named after him, called, yes, the Tristan Chord. Since Lang is alive and well and this music so new, it's worth the energy to consider Lang's intent for the piece both sonically and visually, and then reflect on the interpretation by Zaugg and Good Women choreographer Alida Nyquist-Schultz.

Lang's piece is nearly an hour long and has 15 sections, some of which were from earlier works that were refashioned for love fail. The four female voices (SSAA) are a cappella aside from some minimal percussion mostly played by the vocalists. The lyrics for the piece come from an array of writings, from Lydia Davis, Marie de France, Gottfried von Strassburg, Béroul, Thomas of Brittain, and some of Richard Wagner's version of Tristan and Isolde. The lyrics do not tell the old story of Tristan and Isolde, and instead seem to be musings on the slow death of love. In fact, Lang himself states that the piece doesn't tell the story of Tristan and Isolde. The conceit is that this piece brings contemporary discourse to this tale, like another abstracted Romeo and Juliet, but it feels a bit cheap.

It's hard to imagine why one might think this hour long piece would work well for dance, as it is rather low in overall energy. Lang's constructs of the piece are like contemporary chants. Lang specifically chose chords that are beautiful, but listening to the music feels like swimming in a dark pool full of honey. Pro Coro did a beautiful job with this difficult music (no conductor, a cappella, and very particular and unusual harmonies). But the music does begin to feel effortful in its sweetness.

Lang's staging did not include dance, instead there was a video screen from floor to ceiling behind the four stationary vocalists. The video by Jim Findlay featured campy actors, the staging was otherwise just the four singers in front of the screen.

In the Pro Coro/Good Women version, permission had to be obtained from Lang to perform love fail with dance, which was granted. The choice to have eight women performing a piece about a heterosexual couple is curious. It's unclear what direction Zaugg contributed to the staging of the piece over Nyquist-Schultz, but it seems to have been his concept to have the double quartet, and possibly Nyquist-Schultz made decisions to have the vocalists move about the space and change position from section to section.

It is clear that neither Lang nor Zaugg wanted a conductor for the piece, probably out of interested for minimal staging. The Anonymous 4 who debuted love fail sat behind their music stands in a standard semi-circle. The Zaugg/Nyquist-Schultz staging had all the performers in similar long black gowns and red lips. The vocalists were distinctly passionless as they made their way through the music, carefully watching each other as they approached their starts and stops. From the audience perspective, you could almost see the measure numbers pass by like mile markers on a hot day driving through Saskatchewan.

And that seems to be what Lang was going for in this work. Rather than the spell-induced torrid and youthful affair of Tristan and Isolde, the piece celebrates the sweet, sad boredom of a more mature and every day love, and the weariness of it. The piece is very well crafted, but it's frankly a bit dull, particularly for a dance company known primarily for their sex appeal and woman-on-woman adversity.

Nyquist-Schultz is more likely than the other Good Women choreographers to choreograph to something other than electronic music in 4/4 time. In this case she largely passed over the structure of the music composition in terms of its details and constructs and went (at least initially) with the low energy of the piece. Not a bad decision for someone who may not yet have experience with music in the formal sense. Nyquist-Schultz initially avoided movement more typical of Good Women's work, normally marked by punchiness, victim/volunteer roles, and mean-girl stare-downs.

The movement for love fail initially repeated expansive if awkward slow motions that melt over each other into contracted group embraces and listless tableaus, with much negative space between them, a bit like when people hug but don't want their hips to get too close. The harmonies and lilts in the music brought out a surprising amount of modernist lines and contractions in the dance construction. The dancers seemed uncomfortable with the open space that the music gave them, which became even more uncomfortable in the cramped space with eight people and hunks of lighting gear along the floor.

Further noting the lighting, the large lighting instruments were way too much for a church space with so many windows in the month of April when it's essentially broad daylight for an entire 7:30 pm show. The instruments also carried quite a lot of fan noise, and for anyone who really wanted to enjoy the evaporation of the voices at the end of each phrase, it was a real problem. A few smaller lights without fans probably could have been used from the same close range to enhance skin tone.

Back to the dancing, a few sections into love fail, a puppet of a man shows up in the form of a propped up and swaying empty coat, and a dancer holding a man's hat over where a man's head would be. The other dancers controlled the man puppet while one dancer interacted with it. It was a striking image, and it managed to come off as humorous yet not quite silly. But the puppet man soon went away and did not return for the rest of the piece. Another section of the music, the wood and the vine, affected a vine of dancers creeping, connected lengthwise hand to ankle, slowly creating a circle around the vocalists.

Unlike Pro Coro or anyone else in this production, Nyquist-Schultz had to compose a whole new work. If the general formula applies here - two hours of work for every minute of choreography - then this should have taken about 100 hours to complete, not to mention rehearse. So it wouldn't be surprising that with a purposefully mundane piece of music that the Good Women might fully abandon the ennui after 35 minutes and return to their comfort zone of arm twisting, agony, and abandonment. It's baffling why, in such a classically heterosexual story, that the four female dancers would end up in a brawl. At times it seemed that they were lovers fighting and exchanging among themselves in a love economy, or that they were four, or even eight Isoldes all battling over one invisible Tristan. The end of the piece left the women isolated from each other, with hurt and troubled looks on their faces in a final tableau reminiscent of a soap opera just before the commercial. None of the relationships were clear, only dramatic, and it was difficult to muster any solicitude.

In general, the project was perhaps poorly conceived, with not a terrible result, but a weak, if visually and sonically pretty one. However the artists and producers should all be truly commended, and encouraged to collaborate again. This undertaking highlighted a gap in knowledge between contemporary dance and contemporary music, as well as the imbalances in the collaboration in terms of style, skill, and venue considerations for different artistic needs. Edmonton will only get better at this, thanks to all three organizations, who are passionate about bringing audiences into the conversation of contemporary arts.
.

Posted by JenMesch at 01:46 No comments: