Recently a friend of mine sent me a link to a dance film called Girl Walk // All Day. The video is basically a girl dancing her way through New York City, ultimately asking people to dance with her. It's rather charming, entertaining and infectiously optimistic. It called to mind book I read a couple of years ago called Dancing in the Streets - A History of Collective Joy by Barbara Ehrenreich. A scholarly book, it offers insight into what civilization loses whenever it gets too uptight to participate in dancing in the open with its fellow man.

I can't find it now, but somewhere in my old Dance Ink (now 2wice) magazines there was a quote that struck me years ago. One of the interviewed choreographers said something like,

"The world does not need to see more dance. The world needs to dance more."


At the time, I was an aspiring choreographer, aware of the declining audiences for performing arts, contemporary aesthetic dance being at the bottom of the pile. The statement startled me, and still does. Like other young choreographers, we were trying to create work with the idea that would be seen by others. Young dancers were wondering why they had never heard of Martha Graham until they were 18 and in university dance programs. We were trying to promote concert dance attendance and understanding to the larger public, and this statement shot through to my impressionable core. Now of course I understand that it was meant to be inflammatory and challenging to the dance establishment, and also challenging to the artist ego, something that evaporates when one dances with others just for the sake of it.

Some of the best experiences I've had dancing have been outdoors or in public spaces, especially those that move through the street. Rather than site-specific outdoor pieces where people can come watch, traveling dances give people a fleeting glimpse of something they probably wouldn't bother going to the theatre for. The implication is that people can follow along if they have the time or interest, or even join in.

In and around New York City, Jennifer Monson has fostered what she calls migrations. Often following specific paths of birds, but sometimes water, she is often democratic in who she invites to participate, especially since they are usually over a period of 24 hours and are as much about offering the opportunity to contribute to a collective movement migration as they are about the location, the passing landscapes and architecture, and symbolic pathways. The fact that they are sometimes done in remote locations or in the middle of the night with essentially no audience is fascinating. 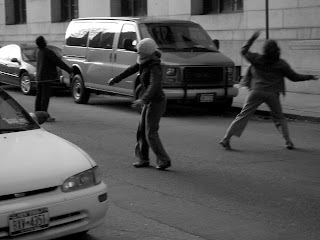 As scholars of dance, we learn the difference between dance as ritual and dance as performance. There are fusions of these where dance rituals are performed as a presentation but the difference is still clear. Ehrenreich's terribly interesting book takes this much deeper and looks at how trends in spiritual practices and politics affect our attitudes about the body, and therefore dancing. During times of extreme repression, dancing (as well as other expressions) are forbidden. Ironically, some religions continue to use dance (or movement) in ritual and prayer to achieve what might be perceived as a spiritual state. Religious intent aside, Ehrenreich implies that these sorts of demonstrative acts of collective movement turn out to be a neglected barometer of the health of our societies throughout history. (see Neo-Tarantism, Quebec protests, cowboys, Lindy Hop, stomp dance)

Girl Walk // All Day is a joyful performance to watch. It is not a complex artistic commentary, rather it is a bit of a measure of our current society using dance as a barometer. She comes across varied attitudes toward her public display, and it's great to watch as she moves through iconic landmarks and diverse neighborhoods of New York City and their own various dance rituals.